The Dons Trust owns AFC Wimbledon football club – but the precise way that we own it has evolved over the years. There’s now a slightly complex number of subsidiary companies.

This page tries to explain it. Ultimately, it’s our members who remain in control.

No individual has a significant interest in either The Dons Trust or AFCW plc. 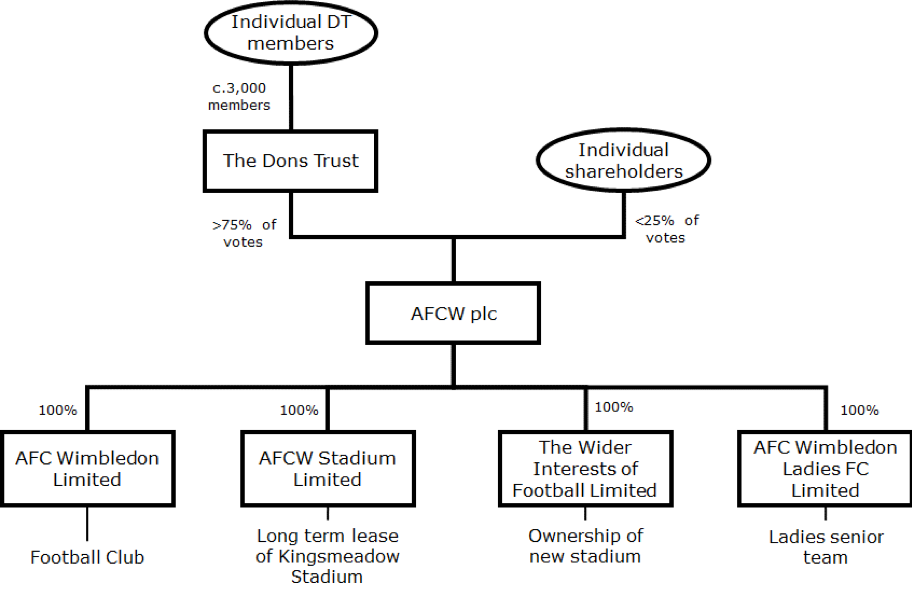 Note: since this diagram was created, AFCW Stadium now holds the short-term lease of Kingsmeadow Stadium instead of the long-term lease.

Individual members of our elected board also serve on the boards of some of our subsidiaries, alongside members and other individuals.

AFCW plc was formed by a share issue in 2003 which enabled the club to raise enough money to buy Kingsmeadow. In summer 2019, a second share issue raised further money to help fund the development of our new stadium in Plough Lane. The Trust owns more than 75% of the votes in AFCW plc, ensuring it remains in control of the club. The remainder of the shares in the plc are owned by individual shareholders.

The current directors of AFC Wimbledon Limited are: David Charles as secretary; Joe Palmer and John Stanley as directors

The Wider Interests of Football Limited is the company that owns the freehold to the land that our new stadium is being built on, and the emerging stadium itself!

The current directors of The Wider Interests of Football Limited are: Joe Palmer and Luke Mackenzie. The company secretary is David Charles.

Please note that The Wider Interests of Football  Limited’s company records are due to be updated shortly.

AFC Wimbledon Ladies FC Limited is the company that runs AFC Wimbledon Women. The girls’ section remains in a separate organisation, not a direct subsidiary of the club.

AFC Wimbledon Foundation is an independent charity that uses the club’s name to deliver projects on sport, health, inclusion and education in the local community.