At the beginning of the season we launched the “Be a Womble ’Til You Die … and a Good Bit Longer” campaign, encouraging supporters to include the Dons Trust or the club in their wills. Here, Dons Trust chair Matt Breach and long-time supporter John Lynch explain why they want to leave a legacy for the club they love.

How do you intend to allocate your legacy when the time comes? Something for you to be remembered by, perhaps, or to help those who you have held dearest? For many people it will be a pretty simple decision: leave their accumulated wealth to family members. But for others, often those without children or whose children have already achieved financial independence, it is becoming increasingly common to bequeath their estate to deserving causes.

My partner and I have no children, so when we recently realised we needed to write a will, we took stock of how best to help our friends and communities. Michelle is an animal lover, and half our estate will go to local charities that rescue and look after animals and pets in need. For my part, my passion is my club, and my “share” will be given to the Dons Trust to help maintain AFC Wimbledon as a fans-owned club in the heart of our community.

I can’t imagine anything I would rather be remembered for than having a hand in AFC Wimbledon’s continued success, particularly as the club is home to many of those I consider my best friends. To whom you leave your legacy is, of course, an entirely personal choice. But for my part, I’ll be “Wombling after I die”!
Matt Breach

I grew up in Wimbledon. My father was Irish, war- blinded at Dunkirk. He supported QPR, and my brothers took to Tottenham and West Ham. I went to school at Wimbledon College and played for Merton Schoolboys. And 50 years ago, Wimbledon FC gave me a complimentary season ticket for my efforts.

I remember seeing my first game at Plough Lane, against Dulwich Hamlet. I loved it, we won, and I’ve never supported anyone else. It’s been a constant in my life, whether going to watch the match or Wimbledon’s being the first result I’ve looked for when abroad. I’ve seen us go through the Isthmian and Southern Leagues and all the way back round again to where we are today. I’m proud of what this club has achieved, and it feels like family to me.

It wasn’t until the death of my mother recently that I thought of my own mortality. Eventually you have to think about your own situation, in my case owning property here and abroad, having some savings – and a fervent desire for the taxman not to get his hands on any of it when I’m gone!

My wife and I don’t have children, so it seemed natural to want our estate to go to a good cause. It struck me that, apart from the people in my life, the Dons are the thing I care about the most, so AFC Wimbledon will be a major beneficiary.

I’ve collected 50 years of memorabilia that adorn my study – or, as my wife describes it, “the Wombles Shrine”. Some of these items, such as the promotion plaques to the old Second and First Divisions, and the old Routemaster bus sign to Wimbledon football, are real collectors’ pieces, and I want it all eventually to go back home where it belongs. The club can keep what it wants for our museum, and auction the remainder to real fans to raise further money for the Dons.

Perhaps the club or the Dons Trust could think about formally recognising fans’ bequests, for example by linking larger donations to club facilities. It would be somehow comforting to think that fans’ names could be remembered at our club, long after they’ve shuffled off this mortal coil.
John Lynch

If you don’t have a will or would like to change your existing one, or if you simply need some advice, then email Jo Milton at local solicitors and club corporate sponsor Morrisons on wimbledon@morrlaw.com, or call 020 8971 1020.

Just think – you could be a Womble legend for ever! 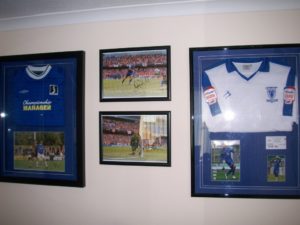 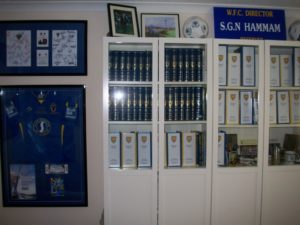