This article was originally published in the Burton Albion matchday programme on 21 September.

David Hall, Chair of the Wimbledon Community Association and Dons Trust Secretary, laments the loss of a building that has a significant place in the history of our football club. 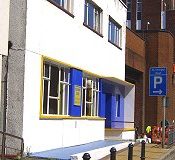 Anyone who passed along St Georges Road in Wimbledon towards the end of this summer will have seen the demolition of the iconic building at No.28: The Sir Cyril Black/Wimbledon Community Centre. Some may breathe a sigh of relief, but others may have shed a silent tear at the loss of this great community asset which served generations of Wimbledon people for over 65 years.

Wimbledon fans may have shed an extra tear – after all, the Centre was arguably the birthplace of AFC Wimbledon. For it was there, at a packed WISA AGM on 30 May 2002, that the seeds of our beloved club were sown, when in response to the scandalous FA decision two days before, Kris Stewart uttered those now-famous words, “I just want to watch football.”

Fran O’Toole, Secretary of Wimbledon Community Association (WCA) since 1995, had, like me, been a Wimbledon fan for many years, and had hosted many WISA and Dons Trust meetings at the Centre. However, Fran also had the pain of witnessing the steady decay of the building as he and the WCA staff and trustees struggled to keep up with essential repairs. Matters came to a head in October 2011 when a major contract was lost, and scant cash reserves dwindled further.

In April 2012, Fran asked for my advice. My sad conclusion was that the building was no longer serviceable. However, our research produced a glimmer of hope when it emerged that according to legal documents dating back to the time of Cyril Black, the WCA was entitled to a third of the site value if it relinquished its remaining interest to the Council, which owned the other two-thirds. After several lengthy meetings it was finally proposed that the Council would provide a loan to the WCA to help meet its staff redundancy costs and other financial obligations, in exchange for giving up its interest in the Centre.

At a packed Extraordinary General Meeting in July 2012, the final one to be held at St Georges Road, members and users of the centre agreed that this was the only possible course of action, and in the months that followed the deal was done. Fran and colleagues left in September 2012, and I took over as WCA Chair, working with new volunteer trustees.

The deal with the Council was finally tied up this June. The new WCA team has been investigating how the remaining proceeds of the sale might be best targeted in line with the charity’s original objectives. Various ideas are under consideration with potential partners, and the WCA will continue to play an important role in the community. At our 2013 AGM, to be held next Monday, we will be exploring these ideas with old users and members, many of whom still operate in the area and would very much like to see new facilities made available.

As for Fran, he used his redundancy money to buy a camper van and travel round Europe. He is now back home and attends the occasional Dons game – he’s the wise old guy in the bar with the beard and the sandals! As many Dons fans know all too well, it is a sad day when part of your history disappears. But the WCA is still firmly rooted in its community – and who knows, one day it might host an AGM back in Wimbledon for the fans-owned football club that also refused to die.

Thanks to Fran O’Toole for his words of wisdom and advice.