The Dons Trust and AFC Wimbledon Foundation are appealing to Wimbledon supporters to once again support Wimbledon Foodbank by donating grocery items at the game against Bristol Rovers on Saturday 21 September.

We have been donating to the foodbank for at least the last six seasons and are again looking to support their important work. With 1 in 5 people in the UK population now living below the poverty line, the work the foodbank does is crucial. Last year the foodbank gave 4,259 three-day emergency food supplies to people in crisis. 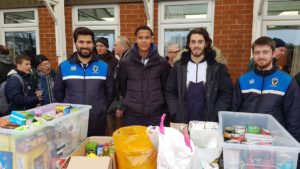 The foodbank’s stocks are lower over the current period following demand during the six-week school summer holiday.

Foundation staff and Trust volunteers will be collecting food donations at the Dons Trust Kiosk and at the Foundation table next to the kiosk between 12.30pm and 2.30pm before the game against Bristol Rovers on Saturday 21 September 2019. We urge any supporters who can help the appeal to bring items on the day.

All non-perishable food items will be accepted, but the foodbank have asked for the following specific items that they are particularly short on:

Dons Trust Board member Jane Lonsdale said: “I am particularly proud of the community work our club does and we have supported the Wimbledon Foodbank for a number of years now.

“Poverty is a big issue for local families in need in our local area and the foodbank are always extremely grateful for the donations we provide.

“I’m asking our fans and members to once again support this initiative.”

This year the Wimbledon Foodbank have also helped with a donation of food at the Active Womble Summer Scheme that the Foundation ran at Phipps Bridge, where a hot meal was given to all 60 children who took part in the free scheme run over four weeks during the recent summer holiday.