Jane Lonsdale, member of the Dons Trust Board and Chair of the Trust’s Diversity and Inclusion Working Group, introduces Saturday’s Kick It Out Day of Action.

All clubs nominate a fixture each season as their Kick It Out Day of Action. In previous seasons, you may have noticed players wearing Kick It Out T-shirts in the warm-up. Saturday’s fixture against Peterborough was our nominated game, and we decided to do more than we normally do.

Kick It Out is at the heart of the drive towards equality, inclusion and cohesion for everyone who plays, watches or works in football, and it opposes all forms of discrimination in football. You have probably seen recent media coverage of some high-profile racism incidents at football, from UEFA competitions down to non-league games. AFC Wimbledon is an inclusive club, and we wanted to use this opportunity to convey that to a wider audience through media coverage and working closely with Kick It Out, and to remind our community that abuse of any kind is not acceptable at football.

As a club, we often talk about “We are Wimbledon” – but what does that really mean? We think of ourselves as a family club (my youngest has been coming to football since he was seven days old), and we invite local community groups to our games, including groups from local schools and the High Path Community Resource Centre. You’ll all recognise the “never say never” attitude and a feeling that we can overcome challenges in our way. We also deal with any abuse incidents by taking them seriously and professionally: a number that you can call or text to report any incidents of abuse on a matchday is displayed on posters around the stadium (and is in every programme – see page 70).

If on a matchday anyone has any concerns over a matter of safety or hears any racist or homophobic language or obscene chanting, or discriminatory or abusive language targeting specific members of the community, they should notify a steward immediately, or text or call the matchday control room on 07704 649119. By reporting an incident immediately, it can be dealt with straight away.

We, therefore, asked all fans, of both AFC Wimbledon and our visitors, Peterborough United, to demonstrate their commitment to inclusivity and show that everyone is welcome at our games. All fans attending the game was given a poster and asked to hold these up when the referee blows his whistle at the start of the game. We also welcomed our Education Football Programme team, who displayed Fans for Diversity banners as the players walked out onto the pitch, and the players were wearing Kick It Out T-shirts for the warm-up. 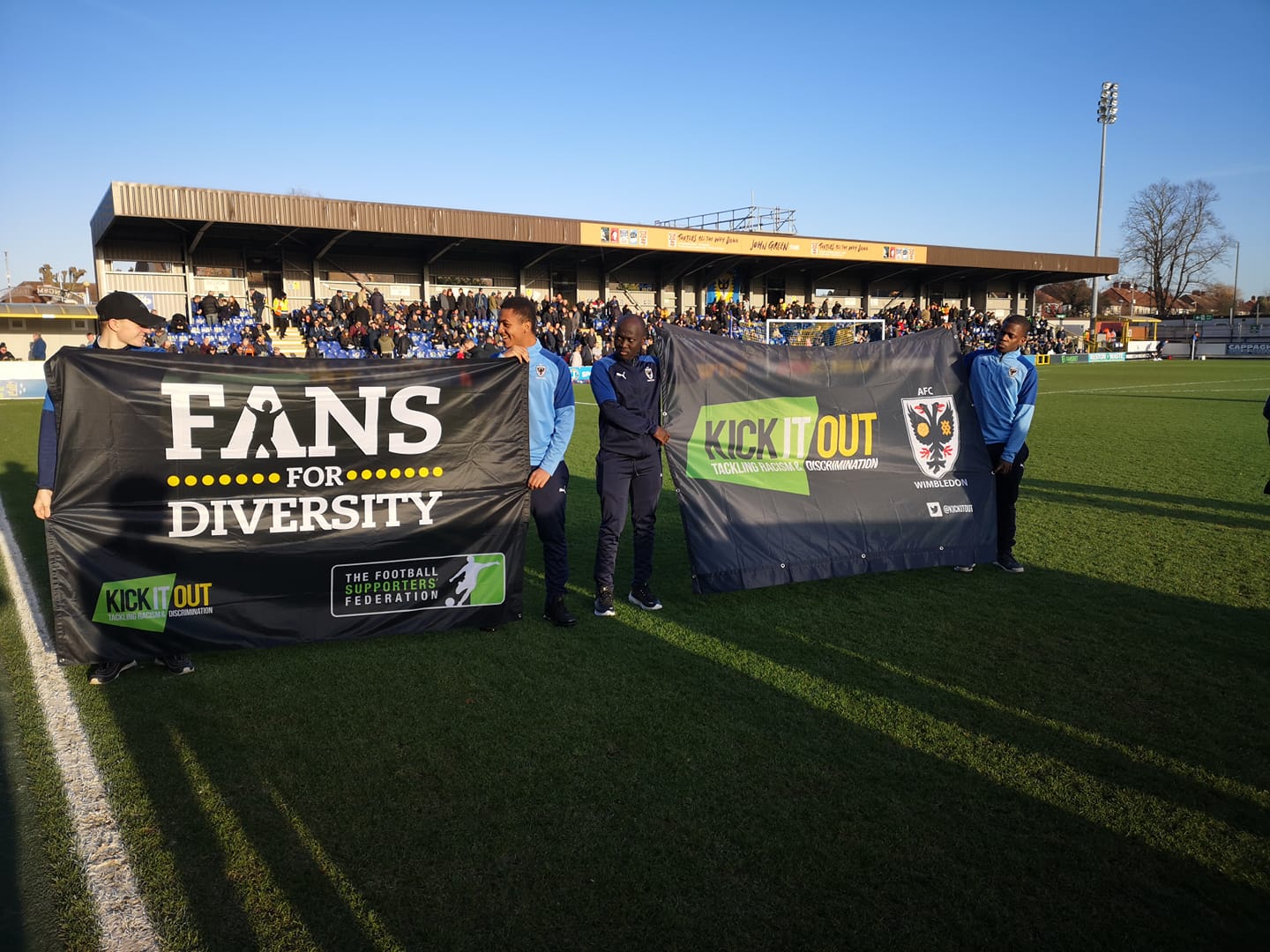 Saturday may have been our Day of Action, but we always take inclusion seriously. There is the matchday reporting number mentioned above. We have introduced free sanitary products for women, and we host Women at the Game events (the next is on 22 February). There are now four women members of the Dons Trust Board. And on Saturday we welcomed a group from Refugee Action Kingston to their first Wimbledon game. I am personally pleased with our commitment to this agenda, and I hope everyone who attended the match enjoyed the day.

Are you a Junior Don aged between 12 and 16? Please keep an eye out for an email in the next couple of weeks inviting you to come along and watch a training session in February half-term and take part in a question-and-answer session with the manager. We’ll also be asking you for feedback on your Trust membership experience.