February has been the annual month of action for the Football v Homophobia campaign, and the Dons Trust has supported the initiative.

AFC Wimbledon prides itself on being a community-focused club, welcoming people regardless of their age, gender, ethnicity, disability, or political or religious beliefs – or their sexuality. So we are pleased to be able to highlight the Football v Homophobia (FvH) campaign’s annual month of action, which has been running throughout February.

FvH is an international initiative that runs all the year round, opposing homophobia in football at all levels, from grass roots to professional clubs. But each year they also earmark a specific month of action in which they aim to raise the campaign’s profile. 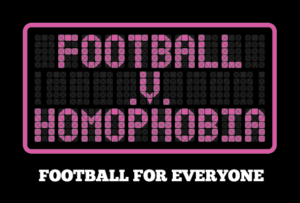 This year’s month of action was launched at Manchester City’s Etihad Stadium and has been supported by clubs throughout the country, ranging from Premier League giants such as Manchester United and Chelsea down to non-league clubs such as Waltham Forest and Merthyr Town, who have all been highlighting the campaign with a number of initiatives.

An FvH spokesperson said: “Prejudice and discrimination in football affects us all, not just LGBT [lesbian, gay, bisexual and transgendered] people. In fact, a lot of the homophobic language and abuse that is directed at football players, managers, officials and fans actually targets heterosexual people – but this doesn’t mean that it’s OK.

“Using discriminatory language towards someone because you don’t like the way they play football, manage a team, make a refereeing decision or because of who they support is wrong. It can be a criminal offence, but most importantly it can make football an intimidating and unpleasant place for people.”

“As a community-based club, we want to create an environment that makes everyone feel welcome,” adds Dons Trust Chair Matthew Breach. “Discrimination against one group can have a knock-on effect, making other minority groups in the crowd also feel unwelcome.”

AFC Wimbledon’s club charter states that “We respect and value the diversity that exists within our communities and are committed to challenging attitudes that promote discrimination.”

The club will not tolerate any discriminatory behaviour on these grounds, whether physical or verbal, by its own employees, volunteers or fans, or by visitors, in the vicinity of the stadium. Whenever such behaviour is brought to the club’s attention, the club will act robustly in taking appropriate disciplinary action.

If you witness any behaviour during a game such as anti-gay chanting, or hateful or prejudiced language, speak to a nearby steward or the police. You can also use Kick It Out’s app, which allows supporters to report incidents in a discreet way during the game. The app figures out which stadium you are in, and your complaint is sent immediately to the control room in the ground.

Alternatively, you can report an incident direct to the club. Club secretary David Charles is responsible for overseeing the club’s charter, and he can be contacted by emailing secretary@afcwimbledon.co.uk, by phone on 020 8547 3528 or by writing to him at:

This article originally appeared in the matchday programme for the game against Oxford United, played on February 27, 2016.

This can make a massive difference to the current funding shortfall of £11m and help ensure that the stadium is built on time while maintaining the club’s fan-owned status.

Check the latest Golden Goals results and find out how to claim prizes.