How you can help make a difference on a match day

Ensuring that all members of our community feel safe and welcome at the club is of paramount importance, particularly as we look to expand our fanbase when we move back to Plough Lane.

In recent weeks, some fans have reported isolated incidents of abuse. The boards of AFC Wimbledon and the Dons Trust share these supporters’ extreme disappointment. 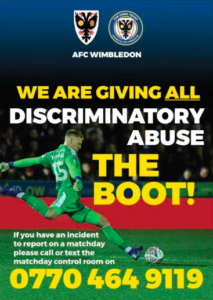 Whilst these incidents are not representative of the majority of our fans, this behaviour is condemned and is not welcome at our club. We are a community club, and all members of our community should be able to watch our matches without fear of hearing abuse.

At the end of last year, the existing statement relating to inclusive behaviour that forms part of the AFC Wimbledon Ground Regulations was expanded. Previously it covered racism and homophobia specifically, but it now includes any form of abuse indirectly or directly targeted at any member of our footballing community.

We would like to take this opportunity to remind fans to familiarise themselves with the Ground Regulations. If on a match day anyone has any concerns

over a matter of safety or hears any racist or homophobic language or obscene chanting, or discriminatory or abusive language targeting specific members of the community, they should notify a steward immediately, or text or call the matchday control room on 07704 649119. By reporting an incident immediately, it can be dealt with straight away.

Please look out for a social media campaign that will be launched shortly, along with posters at the ground and an article on the Dons Trust page in the Peterborough matchday programme, which explains in more detail what happens when incidents are reported.

Together, we can help make sure that our matches are a welcoming environment for everyone.

The safety and wellbeing of supporters entering the Cherry Red Records Stadium is of paramount importance to AFC Wimbledon. The club management reserves the right for its stewards, club officials or the police to remove any person who does not comply with all the regulations.

In particular, fans should not:

The stadium is a no-smoking area, and that includes the use of electronic cigarettes.

Failure to comply with the regulations may result in being banned from the ground. If a fan is banned, that ban is indefinite until the fan has demonstrated that their behaviour has improved sufficiently for readmission to be agreed. Until that happens, the club will encourage other clubs to enforce the ban. Banned fans have the right to appeal against the ban and to appear before a disciplinary and complaints panel to make representations to be readmitted to the ground. If they fail to overturn the ban, they have the right to appeal to the Chief Executive.

The full ground regulations as published by the English Football League are posted in various places around the ground, and entering the stadium constitutes acceptance of these rules and regulations.