Dons Trust chair Mark Davis used yesterday’s matchday programme to talk about a change at the top at AFC Wimbledon. The following is a slightly edited version of the article.

Today I have commandeered the From the Boardroom page, for this one programme only, to report on the recent change in the number one slot at AFC Wimbledon. I’m referring to the position of chief executive officer, rather than goalkeeper, but I’m hoping this change proves to be as positive for the fortunes of AFC Wimbledon as the signing of Aaron Ramsdale was back in January!

As you will probably all know by now, Erik Samuelson, our CEO for the past 12 years, has decided to retire. He had made no secret of the fact that he was looking to step down before too long. We originally thought this would happen once the new stadium was complete.

However, given the colossal responsibilities Erik has shouldered over the years, and the great strides the club has taken under his leadership, he has earned the right to choose the timing of his departure. With preparatory work now under way at Plough Lane, he decided that the time had come.

Being a modest man, Erik asked for no fuss to be made over his departure, and I shall honour that request. In any case, his legacy speaks for itself: we have won four promotions during his tenure as CEO, and are on the cusp of a move back to a brand-new stadium in Merton. That’s a record any football CEO would be proud of, but to achieve it at a fans-owned club with such modest resources at its disposal is remarkable.

Indeed, the fact that Erik chose for many years to double up as both CEO and car park attendant on match days speaks volumes. I wish Erik and his wife, Eileen, a long and enjoyable retirement together. 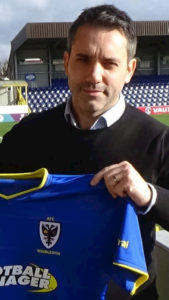 I am pleased to say that we have wasted no time in finding a replacement, with the promotion of Chief Operating Officer Joe Palmer to the CEO role.

Joe was recruited to AFC Wimbledon in January last year. His appointment was always part of the succession planning for Erik’s retirement, which is why we brought in someone who had held very senior positions with two major football clubs: Sheffield Wednesday and, before that, Shakhtar Donetsk.

Despite being in pole position for the CEO role, Joe’s appointment was not a shoo-in. We conducted two formal interviews, during which Joe was quizzed on his suitability for the role and presented his vision for AFC Wimbledon. I also invited feedback from Joe’s colleagues on the Football Club Board

In the end, Joe’s appointment was unanimously agreed by the Dons Trust Board. We were struck by his vision of what AFC Wimbledon could be and his thoughts on the opportunities, as a fans-owned club with a unique brand, to realise our potential. We were also impressed by his credentials, in terms of commercial experience in the football industry.

Those of us who work closely with Joe have seen at first hand the progress he has made behind the scenes over the past year, and the creative ideas he is bringing to the new stadium. The introduction of the new electronic ticketing system here at the Cherry Red Records Stadium is just one example. Besides doing away with the need for season-ticket holders to carry around booklets, this system is generating better data and so will help to make maximum use of the opportunities at the new stadium.

Now that he has been appointed as CEO, you will start to hear much more from Joe about his ideas for the club. Indeed, you can look forward to hearing from him on this page in the Wycombe Wanderers programme next weekend.

The next two or three months will prove to be an extremely busy time as we finalise the contract and financing for the new stadium, agree the budget for the next financial year and start preparations with Wally for the coming season.

Fortunately, Joe already has over a year under his belt with the club to know how it operates. He can also count on the support and collaboration of a long-established Football Club Board, in the form of Ivor Heller, David Charles and Mick Buckley, as well as a close working relationship with the Dons Trust Board.

You can see a video interview with Joe Palmer on the club’s YouTube channel.

The original version of this article appeared in the matchday programme for the game against Bristol Rovers (played on 19 April 2019).