Today is Transgender Day of Visibility, an annual event to celebrate transgender people, the courage it takes to live openly and authentically, while raising awareness of the discrimination transgender people continue to face today.  Transgender, or trans, is an umbrella-term used to describe those who gender identity is different from the sex recorded at birth. 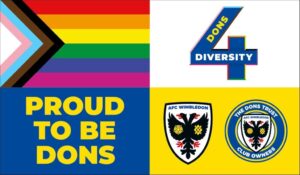 At the end of last year, the Diversity and Inclusion working group, working alongside Anne-Marie Godfrey, launched the Dons 4 Diversity group, a supporter run group for the LGBTQ+ community and Wimbledon fans, their friends and potential new Dons in the area! If you would like more information on Dons 4 Diversity please contact

Below is a blog written by one of our transgender fans.

Most of you don’t know me. Hopefully I usually pass by largely unnoticed. Good, remember it is not nice to stare. You are probably still wondering how I can be you if I am transgender.

I’ve been a Don since the mid 80’s when I was 10. For the last 35 (and a bit) years, I have, when I could, communed with you Saturdays at 3pm. We have laughed together, cried together, danced when it’s gone well, and disappeared down the pub when it hasn’t. We celebrated massive victories together, and watched the club slowly ripped away from its home and its community, but never our hearts.

From abroad I watched a few determined individuals raise our eagle up like a phoenix.

When we can’t make a game, and for me that’s more often that I would like, we spend our Saturdays watching rolling sports coverage, online scores, or listening to the radio. Together we dissect games, strategies, and substitutions always with that air of the all-knowing football fan. We have queued for buses after the game together and squeezed on them when they finally turn up together. We have been fans together.

And at last we go back to Plough Lane…. Together!

I was asked by the club if I have ever experienced any trouble being a transgender fan attending football. NO! Wimbledon fans are very accepting. I put that down to having the club taken away, it hurt us as individuals, made us push back, made us much more of community than other clubs, it united us in a cause, it made us forever Dons. We were always the ‘crazy gang’, the renegades, the outsiders, the ones considered never quite good enough to rub shoulders with the big boys. All the fans know this, and I truly believe that is what has made Wimbledon such an accepting club. Don’t believe me? Take a look around at our fans at the next game you go to.

If I must be defined and labelled, then OK…… I am a proud don!

Gender identity and expression are central to the way we see ourselves and engage in the world around us. Visibility is important to make sure that the needs of trans people are met, discrimination is addressed, and individuals are not left feeling marginalised, alone and isolated.

Some ways you can be a better trans ally: 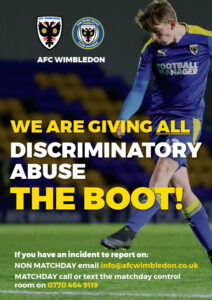