Next month sees the Football People anti-discrimination weeks of action. Dons Trust member Rob Crane explains what it’s all about.

The largest initiative against discrimination in football kicks off on October 8 with a fortnight of events. The Football People campaign is run by Fare, a global organisation that aims to tackle discrimination in the sport. 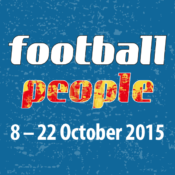 Last year’s fortnight featured over 2,000 activities in 59 countries, including Mexico and Vietnam, with some of European football’s top stars, including Didier Drogba and Éric Abidal, lending their support to the campaign. All UEFA Europa League, Champions League and Euro 2016 qualifying matches promoted the campaign, while 24 leagues and 18 European FAs actively supported the initiative. Other events included film festivals, action days, quizzes, specially produced videos, exhibitions, and even plays and dance events.

The full line-up of events for 2015 has yet to be revealed, but fans of the game are being encouraged to indicate their support by tweeting a photo of themselves with the #FootballPeople and #FP2015 hashtags to become part of the campaign’s public face.

It may be too late to set up your own event for 2015, but grants are available to help with funding if you would like to consider running a local event next year. Such events must have one or more of these objectives:

Fare can also support you if your group needs help with finding local partners, contact with other activists or publicity.

The Fare network is an umbrella organisation that brings together individuals, informal groups and organisations that tackle inequality in football (including the UK’s Kick It Out! and Football v Homophobia). It aims to use the game as a catalyst for social change, tackling racism, sexism, homophobia and discrimination against disabled people.

Fare has a global presence, operating not just in Europe but also in countries such as the USA, South Africa and Brazil. It supports the Mondiali Antirazzisti (in English, the Anti-Racist World Cup), which is hosted in Italy every year and brings together over 5,000 football fans in a free-for-all event. Fare also runs an independent monitoring system operating across Europe to increase understanding of the extent of discrimination inside football stadiums.

(This article originally appeared in the official matchday programme for the match against Northampton Town, played on September 29, 2015.)