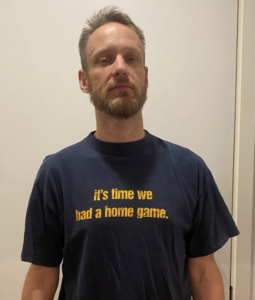 Our club has achieved so much since 2002, thanks to the hard work of many people: board members, players, employees and volunteers. But it has largely done so because every time they have been asked, our fans have stepped u

p and gone above and beyond to ensure this extra-ordinary collective endeavour continues to defy the odds, confound the nay-sayers and prove that nothing is impossible when we all work together.

I went once to Plough Lane and have been a season-ticket holder since the early 90s. I wrote the initial WISA press response to the announcement of the MK move in August 2001 and subsequently was the deputy editor of Yellow and Blue for the last season of Wimbledon FC and the first season of AFC Wimbledon. I became the club’s first in-house media professional for two more seasons.

Subsequently I advised the club from time to time on media and comms issues before setting up and running the Bring The Dons Home campaign to lobby all relevant authorities at each stage of the stadium approval process. I then worked on projects around the club’s branding and marketing in preparation for the return home, as well as the communication for the Back In Two Ticks process for the Dons Trust Board.

Dismayed by the proposals brought forward by the Dons Trust Board to sell off a controlling interest in the club late last year, I set up and ran the Plough Lane Bond (in conjunction with Xavier Wiggins, Damian Woodward and Graeme Price), focusing not only on operational aspects but also the marketing and PR side of the campaign which raised more than £5million to ensure we returned home as fan-owned club.

I am the managing director of a production company which specialises in theatrical and corporate events, as well as a related consultancy business which advises companies on their branding, marketing and experiential offerings. At the time of writing I am planning, scripting and producing a digital event to mark our return to Plough Lane.

If elected, I will continue to provide operational support to the club as I have done for much of the last 18 years. But at the same time I will strive diligently for the length of my term to push for the changes we need in structure and governance.

Most importantly we must ensure that before my two year term is up, we have a club and Trust set-up that is robust, secure and future proof, in which fan ownership has been cemented as the cornerstone of our very ethos. We can and should be professional, well-run and yet answerable to our owners: our fans. We need a fully resourced and accountable operational board as well as a Trust board able to provide clear governance on behalf of its members.

Wimbledon fans’ great strength has so often been to come together well in moments of crisis, as happened again earlier this year. But we need to ensure there are no more crises. We need to have sound governance, ongoing resource and long-term plans in place for the challenges we face in refinancing, in ensuring commercial growth and in deepening the club’s reach & connections across increasingly divergent media and digital opportunities in the changing landscape of football.

And we need to ensure that we do not ever again find such a disconnect between club, Trust and fans as occurred in late 2019. I do not believe the Bond was a success purely as a financial fix. The jeopardy we all faced and the communal solution we all found reminded us what is so special about our club. That spirit led directly to the incredible work of DLAG and it is that spirit that showed us the way to Plough Lane.

It has been a pleasure and a privilege to work with the team management and current players as well as so many ex-players who all came to the fore to make the Bond a success. We need to cement and celebrate that bond between all of us: the fans, the players and club & Trust officials. The talents and efforts of our incredible fanbase can propel us still further, so long as we all work together. We are Wimbledon.