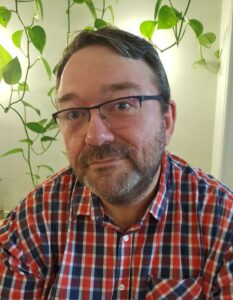 About me: A Dons fan since 1986, I was chair of the Wimbledon Independent Supporters Association 2001-2002, founding Chairman of AFC Wimbledon in 2002 and have been on the Dons Trust board twice, most recently standing down in 2015.

Six years from my last stint on the board, we’ve come a long way (again). I’ve lost count of the number of times people have said, over the years, “what an exciting time this is to be a Wimbledon fan”. And it’s true once again today. I was lucky enough to stand on the West Bank as a teenager. Now at 54 I’ve got my seat in the West Stand.

What has been done to get us here – from despair in Soho Square on 28 May 2002, via Gander Green Lane and Bottom Meadow to the City of Manchester and Wembley, and finally home to Plough Lane once more – is just incredible. And isn’t it great? Doesn’t everyone you bump into at Plough Lane tell you how much they love it?

While we might not be top of the league yet, I love what Mark Robinson is doing and I am sure we have the best possible person for the job of pushing us on. And the work of the AFC Wimbledon Foundation, including the Dons Local Action Group, makes us all proud. Now we need to make sure that every part of AFC Wimbledon is as well prepared and as clear about its purpose.

We’ve had our issues. The funding crisis in 2019 led some to propose we give up control. Thankfully members said no. And the cash raised then was instrumental in getting us to Plough Lane. But there’s more to do – there’s a big chunk of a loan to pay back this April, and currently there isn’t a firm plan in place.

And the teething troubles we’ve had – with ticketing above all, but in other areas too – show the need for a strong board, always representing the wishes of members and the interests of fans generally.

Now is another crucial time for us. If we can keep members engaged, stay on top of financing issues and get the stadium working as hard for us as we have worked for it, we will be well on the way to ensuring we have a sustainable fan-owned club which will last longer than any board member.

This election sees the end of an era, with Jane Lonsdale having decided to take a well-earned break. Jane has been a champion of members ever since she joined the board in 2013 and with her standing down, we are losing that powerful voice for members. While I wouldn’t claim I can fill Jane’s shoes, I’m standing this year to be one of those on the board who is passionate about fan ownership and about member engagement. I am determined that our club will always be in our control.

The recent survey of Dons Trust members showed once again that we want to play at the highest level we can while remaining fan-owned. It also made clear that members want those in leading positions to be committed to fan ownership and that we want a club that is environmentally sustainable and embedded in our local communities. If elected, I’d work to make those things happen.

Hats off to everyone who has done so much to get us back home. We have new generations watching us who weren’t born in 2002. Let’s keep our club safe and sustainable for them and generations to come.

I hope you’re able to support me in these Dons Trust board elections. But if not, please make sure you use your vote anyway.