DTB MEMBER NIALL COUPER HAS A CHALLENGE FOR EVERYONE ATTENDING TONIGHT’S GAME.

It’s Tuesday night, so it must be football night (again).

You know what, there’s not much that beats watching the Dons under the floodlights.

Anyway, as you sit here admiring the stadium we built together do turn your attention to what we can do next.

Get out your phones, there are three things I’m going to ask you to do right now… 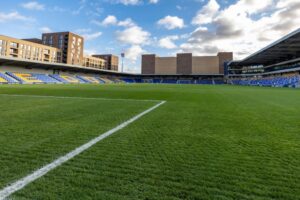 OK, no surprises on this one: It’s Plough Lane Bond 2. Now if you missed the meet the DTB session (what could be better than tuning in to dulcet tones of myself and Kris Stewart on a Friday night) you would have missed the repeated plugging of the Bond.

We soared past £1m last week and are edging ever closer to our initial target of £2m and hope to go even higher.

The Bond is a huge part of the club’s financial plan. The more we raise through the Bond the less we are dependent on commercial lenders – and their less favourable terms – and the less annual interest
we have to pay.

In terms of investment, we think it’s a highly appealing product – now offering an interest rate of up to 6% for new investors and up to 7% if you backed the original bond. So, I’d encourage you to send the link to it now to all your minted friends! www.ploughlanebond.com

Fair Game continues to go from strength-tostrength. Cheltenham Town, are you listening? We’d love you to join our numbers. We may be rivals for 180 minutes a season, but once the final whistle goes we need to stand together and work hard to create a game we can all be proud of.

It is clubs like Cheltenham, embedded in their community and well run, that are a beacon to football. They should be the norm rather than the exception. And Fair Game believes Cheltenham would be a brilliant addition.

AFC Wimbledon are proud founder members of Fair Game. The big idea is real simple. Take the wealth of football – the parachute payments and the proposed new Solidarity Tax Levy – and give it to clubs that are run well using the new Sustainability Index.

The Index would rate all clubs on four criteria: Financial Sustainability, Good Governance, Equality Standards and Fan Engagement. And simply put, the higher you score the more money you get.

It would be the carrot football needs to transform the culture of gambling and unsustainability that has put clubs such as Derby and Sheffield Wednesday at risk, and killed off Bury and Macclesfield, in to one of long-term security that honours the true custodians of our game – the fans.

So, our second action, is to everyone in the ground tonight: Ask Cheltenham’s fans and directors to check out Fair Game. Be nice about it! We’re in this together.

Now this one is easy. It’s another Fair Game ask. On Thursday night Stoke-on-Trent Council became the fourth council in England to formally back Fair Game and everything it stands for.

The Dons Trust and Fair Game want your council to do the same.

Cllr Ally Simcock, who proposed the motion, said: “I am extremely proud to have been successful in proposing Stoke-on-Trent City Council become a fair game council. Standing up for fans’ values and demonstrating commitment to support our football heritage is of utmost importance to
our city.”

There’s a simple step-by-step guide on how to do it at https://www.fairgameuk.org/council-call

Now hopefully that should keep you busy!