BOARD MEMBER NIALL COUPER CELEBRATES 20 YEARS OF THE DONS TRUST

“Take over 1,200 Wimbledon fans, add a liberal sprinkling of VIPs including MPs and members of Merton Council,
guest speakers, a passionate MC, over 60 stewards, the FA Cup and a host of ex-players. Place in a theatre for three hours, and gently stir and infuse with emotion. What have you got? The launch of the Dons Trust on 10 February 2002.”

Those are the memories of Lou Carton-Kelly, the first chair of the Dons Trust, taken from the book, The Spirit of Wimbledon. 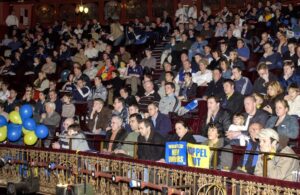 Back then, Wimbledon were a Championship club. But we had problems. Our owners had announced their intention to abandon South London and give our league place to a town in Buckinghamshire. We were playing in Croydon and entering our 11th season as Crystal Palace’s tenants. The chairman, Charles Koppel, had no intention of ever returning the club to Wimbledon. He had even addressed a local Wimbledon residents’ association saying: “Football supporters are not necessarily the kind of people you want on your doorstep.”

The writing was on the wall, we needed to build an alternative.

Gail Moss, the publicity officer of the Wimbledon Independent Supporters Association at the time, recalled: “It was now clear that instead of doing all he could to back a return to Merton, Koppel had stooped to helping a small group of residents in obstructing attempts to bring the club home. Moreover, his insulting remarks showed the fans what Koppel really thought of them – his own club’s ‘customers’.”

In short, we needed to build a body that could take over. We needed to create our own Supporters Trust. Lou recalls: “The timescale for the launch was very ambitious, but it was also the only date that Wimbledon Theatre could accommodate us. They gave it to us for free. As for the night itself, I didn’t really know what to expect. We had various working groups working hard to try to make the day a success, and prior to the launch we were all really anxious. We wanted to show the community of Merton that we meant business.”

Chris Philips – then a DJ at Kiss FM and now our announcer – was the MC. Stuart Pickover, the Mayor of Merton was there, alongside the local MP Roger Casale, and a range of ex-players like Dickie Guy, now our life president, Jeff Bryant, and ex-manager Allen Batsford. 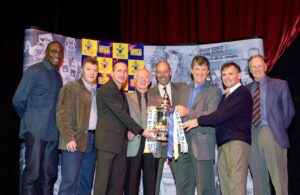 Also in the attendance was Lord Faulkner of Worcester. He remembers the night well: “The whole evening was electric. Everyone wanted to sign up to join the Dons Trust. We had laid the gauntlet down to Charles Koppel. Wimbledon fans were ready to take ownership of the club.” The rest as they say is history.

Three months later, Lou and her counterpart at WISA, Kris Stewart, now the co-chair of the Dons Trust, would address the three-man FA Commission, but to no avail. The vote was lost 2-1 and our league place went 60 miles north.

The report famously concluded that re-starting again was not “In the wider interests of football”.

But two days after the fateful decision, the latest chapter of Wimbledon’s history began. And a matter of days after that, the Dons Trust took control of AFC Wimbledon. We had no money, no ground, no players, no kit, no staff and no league place.

I remember serving on the Board in those early years. And we set some ridiculous aims: Return to the Football League in 10 years and get our own ground back in Merton.

Of course, we failed to meet our target. We did it in nine. And now we have our own stadium.

This is A Fans Club. 20 years on – You have helped us achieve the impossible. Happy birthday to the Dons Trust.