A unique work by artist Richard Argent will be unveiled in the fans zone, opposite the club shop, ahead of our game on August 9 – and you can order a limited-edition copy. The 5m x 3m cartoon depicts the history of Wimbledon’s football club and was commissioned by WiSH. 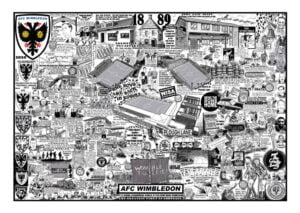 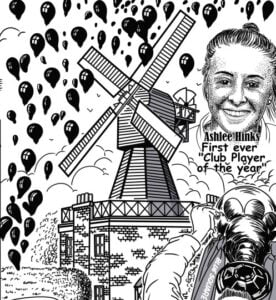 Richard’s art not only relives some of our best-known achievements but also tells some of the more quirky moments from our past, including how George Best almost bought the club in the 1970s and how our bid to bring in extra revenue was thwarted by a seventeenth century by-law!
You can enjoy your own copy, available to buy from WiSH for £25+pp – please email info@wimbledoninsportinghistory.com for more details.
The first 200 will be limited editions with the coloured badge, after that the cartoons will be available in black and white. Proceeds will go towards future projects.
Richard says: ‘AFC Wimbledon is undoubtedly the most interesting team history I have had the pleasure to draw and with the help of WiSH and club historians to pinpoint key dates, people and facts it is my hope that an entertaining and informative picture has been produced.’
Project Manager Matthew Couper added: ‘We wanted to find a place that would give the cartoon the profile it needed and are grateful to everyone at the club for making this happen. Naturally we can’t include everything and I’m sure this will spark conversations and debate.’