Dons Trust Board member Graham Stacey wrote a piece for last weekend’s AFC Wimbledon vs Hashtag United programme, which we have produced in full below:
The Dons Trust Board’s Graham Stacey talks about progress on and off the field
Football is the top participation sport for women and girls in England and, off the back of the Lionesses’ Euros victory, the popularity of the women’s game looks to be going through the roof. There’ll never be a better time to capitalise on this interest.
Luckily, we’re looking to be in great shape on the pitch – with Kevin Foster able to make some fabulous additions to the squad that finished third last year, we look well equipped to make a real challenge for promotion to the FAWNL Southern Premier division. 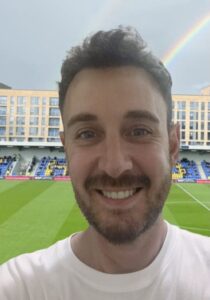 And around the club we now have some 300 women and girls representing AFC Wimbledon across various sides and age groups, all of whom share in the excitement that women’s football is generating at the moment. But while it’s great that we have a team able to compete on the field, and the stars of the future donning the yellow and blue, we need to progress off the field, too.
I’m delighted to tell you that the Dons Trust are proud to be sponsoring AFC Wimbledon Women to the tune of £40,000 once again this year. That may not sound like a huge amount in the grand scheme of things, or when compared to men’s football perhaps, but when you consider the majority of the club is run by volunteers, it adds perspective.
There has been progress in other areas, too. As part of the club’s new kit deal with hummel (and after years of badgering from the Women’s team hierarchy!) we have been able to introduce new female-cut kits for the first time. That’s long overdue, but a great development nonetheless.
You can also now buy a season ticket to watch the Women’s team – for a bargain £50 – for the first time.
And last year the team played at The Cherry Red Records Stadium, going on to win seven games out of eight and scoring 22 goals. That’s something we’ll be looking to build on.
But for now, wherever we play, your support makes a huge difference. And if you’re reading this, you are playing a part in ensuring we
ride this wave and ensure the progress we are making – on and off the field – is sustainable and long-lasting. I hope you enjoy the day
and come back again.
In the short-term, what with the men’s team also looking to try to get out of the fourth tier, it could be a very good season to be a Dons fan.
#COYD