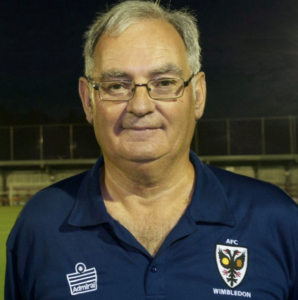 What Wimbledon AFC means to me:-

I’ve been a lifelong supporter of Wimbledon Football Club since the plough lane days. I have lived in Merton all my life and have undertaken many voluntary roles at Wimbledon FC over the years.

With the New Stadium and our return to our spiritual home I believe AFC Wimbledon is on the threshold of a new and exciting era. Contributing to the continued success and expansion of a Fans Owned club will fill me with intense pride. Football and charity work is my very essence, I am currently a Director of the Ladies Section and seeing the ladies teams grow, supporting the foundation and its community work and developing an international presence for the club will be my driving force…

My Commitment to Wimbledon FC & AFC Wimbledon (past & present)

What I stand for

My vision and ambitions for AFC Wimbledon

I am currently retired and am devoted to AFC Wimbledon. I am a founder member of the Dons Trust and a Shareholder and have served as Chairman, Vice Chairman and Fund Raising Secretary on the Wimbledon FC Supporters Committee, as well as a general Committee Member for many years.

Over the years, I have held many volunteering roles for AFC Wimbledon including pitch maintenance, stretcher duties and Ladies 1st Team Manager. I am currently a Director of the Ladies Section & Life Vice President of the Ladies & Girls section, which has grown from one team to 16 teams since the section was formed in 2004. We have over 250 players from the age of 9 up to Ladies with a lot of success. This season has seen more girls’ than ever progress through the ranks to the 1st Team and the talent coming through looks even better for our future.

A Governor of a Merton High School, Chairman of a Merton Tennis Club, Manager, Secretary & Chairman of A Few Football Clubs. I have served on School Parent-Teacher Association’s and raised lots of money over the years for schools, sports clubs & charities (includes cooking thousands of meals for the homeless in London). I have been a qualified Football Referee since 1972.

What I would like to bring to the Dons Trust table

I would be there for the fans to talk to about anything to do with the development of the club and how we can improve the match day experience.

We have a great club that needs to grow its fan’s base fast in the next few years, so we need our younger supporters to get the message out to their mates, so they join our club on & off the pitch.

My ambition is for the Ladies & Girls sections to be fully integrated into the club. Our aim should be to get our Ladies 1st team into the Women’s Premier League, to have Elite Girls football teams, a Girls Academy as well as Grassroots Community Football Teams.

I would actively promote for AFC Wimbledon’s training facilities to be available, to everyone at the club (Men’s Section, Ladies Section, Boys & Girls Academy, Disability Teams, The Foundation, Elite Girls, Plus Community teams).

As a Fans owned Club, I believe we can harness the ideas and enterprise of our fans. The success of the Plough Lane Bond illustrated this in the most powerful way.

We have a great opportunity now we are moving back to Plough Lane. We are a fans owned family club and we want our club to grow. I believe our Fans owned model shines brightly.