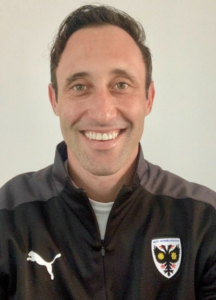 I know that I am an unlikely candidate for The Dons Trust: I’m an American. I live in California. I haven’t been to Plough Lane.  I haven’t met many of you, for whom I know the club is deeply important and personal.

But through a winding, haphazard journey, I’ve become a supporter of the club – and what is clear is that the story of AFC Wimbledon transcends the thousands of miles between us.

AFC Wimbledon is an underdog story.

Any sports fan, anywhere in the world can sympathize with the pain of a beloved team being ripped away from a community that has supported them through best and worst of times, of loving a club but not being loved back.  But what is so special about the AFC Wimbledon story is that it doesn’t end there.  Wimbledon fought back and rebuilt from scratch, showing what’s possible when a community comes together.  As someone who loves sports, I couldn’t help but be inspired.

AFC Wimbledon also finds itself at an inflection point.

The club has been promoted with ease through the lower leagues, but naturally, this will become more competitive.  A new stadium will be finished and opened, creating new responsibilities to run the facility and potentially develop the surrounding real estate.  New types of media will create opportunities to develop the next generation of fans, but only if used properly.

My entire career has been focused on these very circumstances, helping sports and media businesses grow into the next chapter of their history while remaining steadfastly true the core of what made them great.

I did this first as a consultant at McKinsey & Co. where my primary work was in helping the major American sports leagues find their next areas of growth, including projects to improve team financials and build out a league-wide China strategy.

I then joined Bloomberg LP, leading strategy for Bloomberg’s digital properties during a period of intense scrutiny on making them more profitable.  As part of my work, we redesigned Bloomberg.com and acquired, then relaunched, Businessweek in print and online.

After graduating from Harvard Business School, I joined The Weather Channel, a ubiquitous media company known as an “American institution”.  We built upon what had made the brand great in order to meet the challenges of a new media world.  I served as Chief Operating Officer, where I led Digital, Radio, Technology, and Business Development.  Our company succeeded in our mission, and for my work, I was appointed to the 2015 Forbes 30 Under 30: Media list.

Most recently, I served as Chief Digital Officer of Creative Artists Agency, the global talent agency representing the world’s biggest stars in Sports, Film, Television, and Music seeking to diversify into become the owner of media businesses as well. I ran CAA’s portfolio of non-agency businesses, including a $150M+ ticketing company.  I also led the company into new lines of business, including the acquisition of a European football agency.

It was during this time at CAA that I had the good fortune to cross paths with AFC Wimbledon.  We explored investing in a British football club, which ultimately didn’t make sense.  But in this exploration, I came across AFC Wimbledon, originally as a team that has all the raw criteria to become an economic success.  I loved the team’s story, so I started watching matches.  But soon, that innocent spectating became full-on fandom, as I cheered on the team in the FA Cup, in matches to avoid relegation, and in competition against Milton-Keynes.  Now, I’m a fully converted Womble.

AFC Wimbledon is an underdog story.  And I’d be honored to help continue the fight.