Graham Stacey has stepped down from the Dons Trust Board, with effect from December’s AGM.
With Graham midway through a two-year term, this means there will be an extra vacancy, for a one-year term, at this year’s DTB elections, which open on Saturday, October 8. 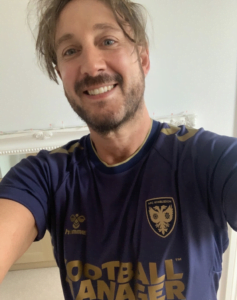 Graham explained: ‘I was elected to the board in 2019 when it’s fair to say things had gone badly wrong and on the night I was inducted we were told that we would have to sell the club or go bust, and couldn’t afford to build the stadium we had started. We had a lot to do to turn that around. Since then much has been achieved to secure the future of the club, and we’re now in a place where we can look forward to a promising, sustainable future at our Plough Lane ground.
‘I would like to thank my colleagues, past and present, and all those who contributed since those dark days to getting us where we are – whether through setting up the Plough Lane Bond or contributing to it, whether volunteering your time or buying a drink behind the bar. You made it happen and deserve all of the credit.’
‘It has been an absolute privilege to serve the greatest fans in the country and I hope I have been able to make a small difference over the course of the three years, but I now feel the DTB is heading in a new direction where it would be more fitting for others to step in.
‘As ever, I would encourage anyone considering it to go ahead and stand at the upcoming DTB elections, ensuring a contested election and giving members a voice in the future direction of our fantastic club.’

DTB Chair Kris Stewart added: ‘On behalf of the board I want to thank Graham for everything he’s done for us over the three years. We know he won’t be disappearing from the scene, and we look forward to answering tricky questions from him at members’ meetings in the future. On a personal level, Graham has been a great sounding board for me since I rejoined the board, and that’s been hugely valuable. So thanks, Graham. And good luck with whatever you fill those long evenings with after the AGM.’